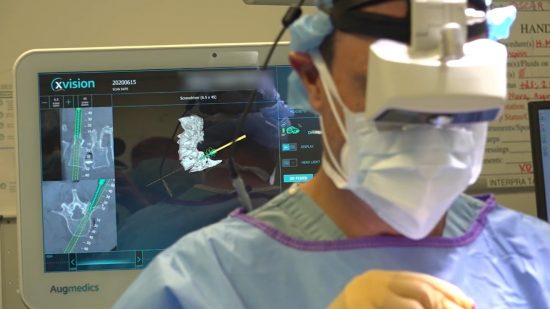 David Goldman, VP Marketing of Lumus:  Could you introduce Augmedics and a brief history of the company?

Nissan Elimelech, Founder and CEO of Augmedics: Sure. So, I founded Augmedics in 2014 after I worked at Medtronic. I saw the need for spinal surgeries for a better navigation system for surgeons. I wanted to give surgeons a better experience when they are navigating the instruments and the implants this into the patient's body

Instead of their current navigation systems they used when they would have to take their eyes away from the patient and look aside in the distant screen to navigate their implants. And that is very uncomfortable and not intuitive for them. It also requires a long learning curve until they got used to the system and used it routinely.

It frustrated me when I worked in Medtronic to see that they spent a lot of money on the system that Medtronic was selling them, and eventually, they don't use it as often. It's just wasted money and time. I wanted to give them a better experience.

My vision was that surgeons would like to feel like they're superheroes and have extra vision and see through the patient's skin and tissue when they operate on them. And I wondered if that was even possible. I started to look on various technologies to see how we can make it happen. And, and I found you [Lumus]. I found Lumus. That’s the reality. We found that there’s a company in Israel that is doing exactly you know what I imagined, at first in a glasses form factor. But eventually, turned out to be a headset, which is more comfortable to wear during the surgery. This is something that they're used to doing. Anyway, it's an eyewear that we designed that projects all the images of the navigation in 3D directly to the surgeon’s retina, and it helps them to get all the navigation data directly when looking straight at the patient instead of looking aside on a distant screen. So that's a very brief overview about the need and how it all started. 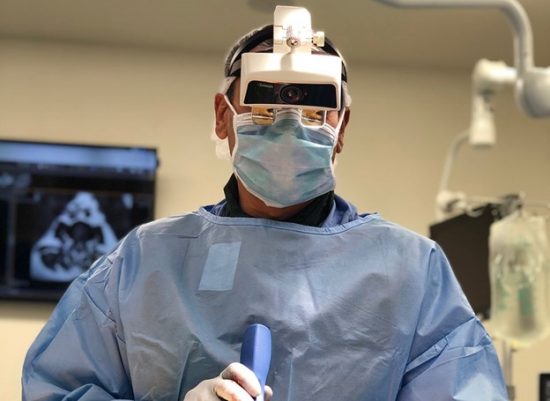 And was Augmedics the first surgical navigational tool for surgery that was FDA approved?

Your company wanted to be the first FDA approved surgical navigation device, and you were.  Am I right that so far (as of this interview) no one else has emerged?

That's right. No one else has received FDA approval as of yet [the time of this interview].

What made you decide to actually manufacture and assemble everything in Israel as opposed to outsourcing to Asia?

Well, I like to do things on my own. I mean, it's the way that I like to manage things. I like to manage it directly and not to outsource and to count on others to do their job perfectly. Right? So, I'm accountable for everything, and that's how I want it to be. It's all about accountability. I want to control things, to be responsible to do it the right way. It's all about the details, eventually. You know, the closer it is to you, the more you may pay more attention to the details. And that's the key to success in my opinion.

Augmedics is unarguably a success story as the first company using AR technology to receive FDA approval for surgery.  We answer thousands of queries from all over the world and have seen many startups come and go.  Augmedics is on the short list of companies to succeed. How did you manage to succeed?

Well, there are phases to any technology that is in development. But I would say that in the in the initial two years, from 2015 until 2017 what we did was focus on the proof of concept. So, we assembled the parts together, and we had the software running. And we did some cadaver trials. Animal trials, then demo-ing the system, But it wasn’t yet really product.

After we raised the money, we turned it into a wireless system to be a real product that we have today. And at the end of 2019, we got the FDA clearance. So I would say it's a relatively short amount of time to develop everything from scratch. We're an Israeli startup and we work fast. 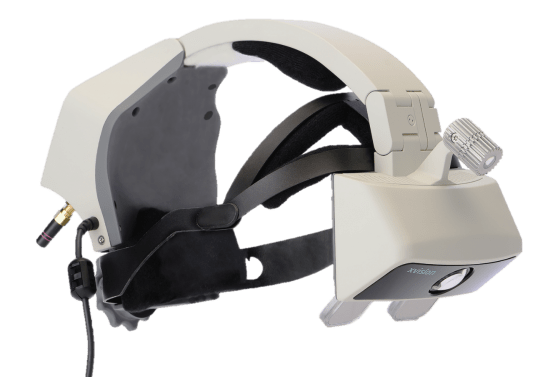 How did you start working with the prestigious Johns Hopkins Hospital?

We started to work with John Hopkins right at the beginning to get their feedback and to just have access to their cadaver lab and surgeons. So they could tell us what we did well and where we could improve. We started working with them in 2016. We worked with the surgeons then at Johns Hopkins.

Was your relationship with John Hopkins for the trials from your previous work at Medtronic?

No. It was a lot of connections because of our marketing. That's another topic to discuss. You know how early you should emerge to the outside and announce what you have developed or what you have. Sometimes it's better to hide it. Personally, I believe in very early marketing. It means that I go full-blown, you know, right from the start and show everything that I have instead. That brought us a lot of good relationships and many agreements that we’ve had for a long time.

With software, everybody knows Red Bull and the M&Ms or Skittles overnight and you have yourself a new build. But fast turnarounds for hardware aren’t easy. What’s your approach to achieve quick turnaround cycles?

Being local helps. Usually, there's longer cycles of development because every time you do something internally,  you need to send it to your manufacturer which takes a huge amount of time until you get it back, test it and re-iterate. But we compressed the time by doing magic (laughing). We did a few designs. We spent more money. While we were efficient with the money, we could have been even more conservative with the money. But we weren’t for a reason. We wanted to run faster. That was important.

In a recent press release I noticed the employees themselves were a big part of the last round of financing. Can you say a few words about that? How did that happen?

Sure. So, the employees in the U. S wanted to invest actually a long time ago. In the middle of last year when we just recruited everyone in the US, they all wanted to put their money in because they thought it's the best innovation that they have seen in medical devices.

They all had experience in selling medical devices and they knew the products in the market. So, they knew how to recognize what is a game-changer and what's not. And they thought that this is something they would like to invest in. I never let them invest because I didn't want to. I didn't want my employees to be my shareholders and that I will CEO answering to them.  So initially, I rejected the idea, and then we started raising Series B and we were getting offers. We had actually two-term sheets in March of this year 2020 and we were very close to signing and deal.

But then we had the Corona and everything. Our investors were sitting on the fence and they didn't want to sign anything until things will be cleared up. But we didn't want to wait. We wanted to close the round. We had other investors who already got about $10 million in the company. But if we wanted to close it, we didn't have any lead investor to close the deal. So, what we did eventually is that we allowed the employees to invest.  But we made the structure so they created a company, an LLC that they invested money into it. And Tim, who is the president and chief commercial officer served as a proxy to everyone.

I see he sits on the Board for everyone. Nice.

That’s correct. And in that way, I don't have to actually, you know, have to deal with every single one of my employees, but rather to have Tim, the president is like a partner to me.

What's the vision for the company in terms of expansion, not just the number of systems that you sell for spinal surgeries, but in moving into other areas?

So we're addressing right now, only the spine surgery market. But obviously, we do have intentions to go in other surgical markets. Augmedics always intends to remain in the surgical field or operating room. Our next application is for brain surgery and is planned to be launched sometime in 2022, maybe in the middle of the year. Q2 or Q3.

Wow. I thought you were going to say knees. But you’re going for the brain. That's ambitious and  that's obviously a critical market. And I guess they're still using the old surgical navigation technology for brain surgery?

Yes. That’s right. Well, the brain is the more straightforward place for navigation. We're thinking that the markets that we want to address are based on the need. How badly they need the technology. For spinal surgery, there was a low hanging fruit because they needed it so badly. There's nothing good for them right now, right? So that's why we started there. In brain surgery, it's like an essential tool. You cannot operate in the brain without having a navigation system. They don't have any other solutions, so now there’s a different challenge when we actually need to convince them to replace their old system with a new method of navigation in the brain. That's why brain surgery is our second market choice.

Is heart surgery another market?

Not really. For heart surgery, it’s something else as it is soft tissue. We are going to stick with hard structures as the registration of these structures is consistent and precise.

Interesting. I hadn’t considered that the heart tissue is in motion and more challenging for the system to register accurately.

That's right. That's right. The core technology is a compact surgical navigation system that on the headset instead of having a big, bulky computer with monitors.

It seems to me that Augmedics is really addressing the challenge of the cognitive load that took place while using the standard surgical navigation technology.  This cognitive load that the surgeons had when they were looking at a monitor and then back to the patient and back to the monitor. It takes the brain time to focus again. And it sounds like you're just you're bridging the gap with your technology.

Yes, that's right. That's the value. You asked why were we successful? Another reason was our focus. We focused directly and solely on the application for this market.

Initially Lumus was selling our optics to you directly. Now you are sourcing directly from Quanta Computer, our ODM partner in Taiwan. How has that relationship been going?

Quanta Computer That relationship been going well. Very well. We like working with them a lot. They actually listen to our needs, and they agreed to do some design modifications. Some cutting of the lenses differently. I think that the overall experience is very positive. Like working with Lumus they have been a very good partner.

Amazing. Quanta is sitting over there in Taiwan. I would assume that place as well as the rest of Asia could be a huge market for Augmedics as well?

Yeah, all the world is actually a potential market for us. We intend to go outside the U. S. as early as the end of next year. As soon as we get some CE clearance, maybe even the middle of next year. We plan to start distributing our product all around the world.

Wow, that's great. Nissan, thank you so much for your time. It's really been interesting.

Thank you very much, David

Okay. All the best.