Why AR is the 2nd Internet?

Why augmented reality is the 2nd internet? Interview with AR Leader Ross Quintana 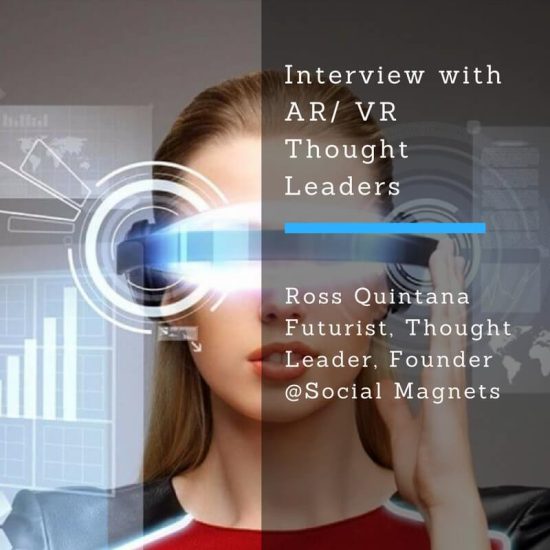 Virtual and augmented reality technology are moving at a blistering pace, and the buzz around these technologies is rising. Is this the year that AR finally makes its breakthrough as a mainstream technology?

In our interviews with industry evangelists series the goal is to hear from tech enthusiasts, futurists and influencers about moving this amazing technology forward.

Starting our series with Brian Wallace, CEO of Nowsourcing, who offered important insight on the emerging space. Today, we’re speaking to Ross Quintana, Founder of SocialMagnets, a leading tech and influencer site. Ross is a serious growth hacker and futurist with impressive knowledge in the fields of marketing, startups, and tech.

As a serious AR/VR influencer, Ross certainly provides a unique perspective on the space.

What excites you the most about the future of this technology? And what inspired you to get involved?

AR to me is the second coming of the internet.

AR will move information off of devices and screens and into the real world where users will be able to interact with it. As someone who would have a tough time living without the internet, I find the future of an information integrated world very exciting.

What do you think are the biggest barriers for AR/ VR are right now?

The biggest barriers to AR/VR right now is technology and content.

Clearly, this technology still has a way to go to get really excellent. As with most things it needs to be smaller, faster, less intrusive and better UI. The content needs to get beyond the novelty generation and into the developed, useful, engaging, and expansive generation. Usually the first iterations are show off gear of what we can do that we couldn’t do before the technology.

The volume of AR content needed to show value will stifle the excitement of those using the hardware. That is cool at first then gets old.

Think about smart watches. Many people bought them then sold them on Craigslist much like gear VR from Samsung. They wanted to try it but it didn’t have the volume of content to make it a must have beyond initial buy it and try it. Often the second wave of technology makes the initial offerings way less valuable so when the first gen of technology comes out with the novelty factor, high price, and limited usefulness and content that is what most people being introduced to new technology experience. Though there are constant advancements in this field, from the consumer side the mass experience is not one of cutting edge it is of first gen novelty.

Often the initial volume of content is very small compared to an established marketplace. Like a new game system, it is cool to have it first but that also means limited game library. The previous game system has a huge amount of content by comparison as it is finishing it’s market cycle. When products first create a category the volume of content is very limited and when you slice up the fact that all original content is not going to be a fit for every purchaser of the technology that means the usable content for an average user of new technology is even smaller. This means even if they love the device they will quickly lose excitement for it if a steady wave of content that they want isn’t produced fast enough.

In the technology today, what do you think is missing?

I think it is a lot like when 3D movies first came out. The scenes for 3D movies were not integrated, they were a showcase of the obvious use of 3D. This made it cheezy and failed to deliver immersive context for the technology. VR and AR are in the same boat . While the technology is still interesting enough to be a novelty, yet not refined enough to be a serious value add to consumers. This technology needs to get smaller and the interfaces need to be very good.

How mainstream is AR/VR technology really going to be?

AR and VR are very different uses and markets. AR is the winner for me. It is like the difference from gaming and the internet. VR blocks users from the world, transporting them into an immersive alternate world. This form of immersion requires significant time to truly experience it properly. AR on the other hand is like mobile. It can go with you everywhere and be useful. History has already proven the later is more useful and profitable. Both will be big but AR use will dominate.

AR will be at least as big as the smartphone if not larger as it will provide an enhanced life that people will not want to live without.

Pokeman Go is all the rage. Besides fun, are there any real AR/VR use cases?

AR for industry and business will impact real time collaboration really cutting into teleconferencing and the travel industry. Taking off where AV for business left off, the expanded capabilities are huge. The same holds for the healthcare industry. Centralized services will become ubiquitous. This is a business game changer. professional services and the freelance economy will also see huge impacts as well as remote work.

Many people are concerned of the affect AR/VR can have on our bodies. Can consumers really cope with this technology?

Many people are concerned about wireless technology, radiation, and technology close to their head, eyes, and body. Shielding technologies need to be integrated to go beyond regulation standards because companies want people using their devices as much as possible. Privacy concerns also need to managed in a proactive way. Society is more open to livestreaming, but failing to safeguard users from hacking and privacy leaks will diminish the trust in using the devices more often.

Anything else you’d like to add about AR/ VR that’s important to consider?

AR will bring the internet into our lives in a way no screen has ever done. Focusing on adding value to users while still respecting privacy and social norms is going to be key to advancing this technology as well as making it smaller and less obstructive.